Disneyland at Christmas: What to See, Do and Eat

There’s nothing more magical than the Happiest Place on Earth during the holidays.

But visiting Disneyland at Christmas can be an overwhelming experience with so much to see, do and eat – and with so many people.

Here are the things you need to know when planning your trip to Disneyland during the Christmas season: 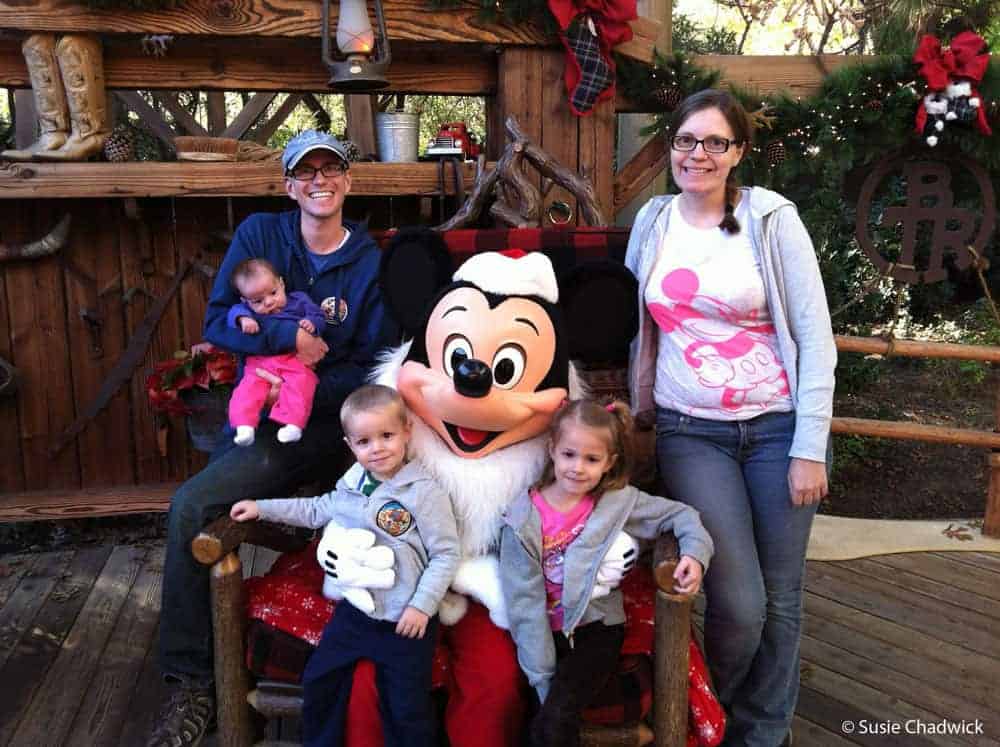 Some of the links on this site are affiliate links, meaning if you book or buy something through one of these links,
we may earn a small commission – at no extra cost to you! Read the full Disclosure Policy.

Disneyland at Christmas: What to See, Do and Eat

All of the Disneyland Park and Resort is decked out in holiday decorations including Disneyland, Disney California Adventure, and Downtown Disney. There are themed decorations for each land, and the detail is amazing. 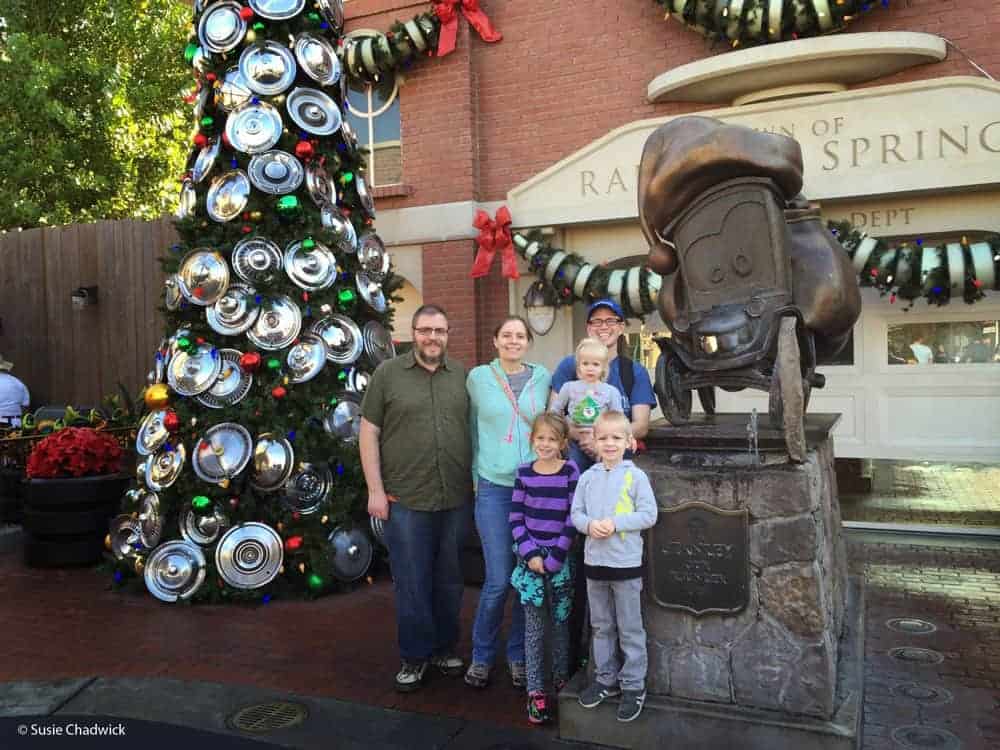 Disneyland’s holiday parade is musical entertainment for all ages. All your favorite characters will make an appearance, including Mickey and Friends, Disney Princesses, Pooh and Friends, and Santa himself, as well as holiday characters such as reindeer and gingerbread men.

Christmas Parade Viewing Tips: Across from The Matterhorn next to the Alice and Wonderland bathrooms is a great spot to watch the Christmas Fantasy parade. There’s a long bench along the castle wall, and that side of the road gets early shade, but it’s not too crowded. Another good parade viewing spot is along the It’s A Small World mall. If you go to the first parade viewing, you can stay in your spot to watch the It’s A Small World lights turn on shortly after the parade.

The “Believe…In Holiday Magic” Fireworks Spectacular features dazzling fireworks, stirring music and a delightful sprinkling of snow. It’s a show for all ages! 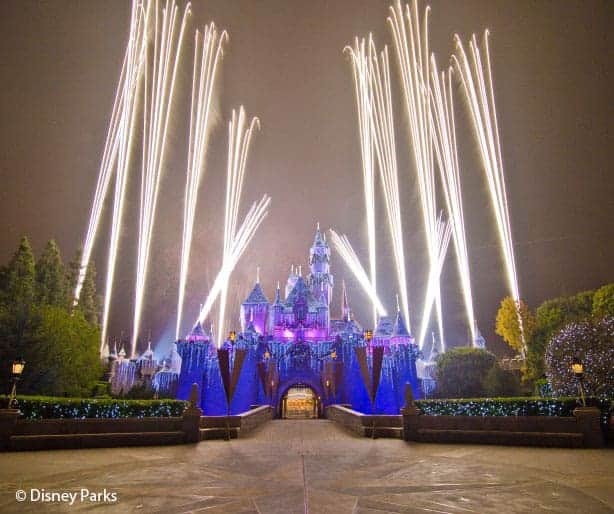 Best Firework Viewing Spots: ….that don’t require saving hours before, are on Main Street, to the right of the Partners statue. Make sure you can see the castle walls so you don’t miss the projections! If you want to watch the fireworks from somewhere other than Main Street, my favorite spot is New Orleans Square. There’s plenty of seating, no crowds, and an excellent view of the aerial fireworks where you can also hear the music.

MUST-SEE: World of Color: Season of Light: A special version of World of Color is shown at night during the holiday season at California Adventure. The show features clips from Disney and Pixar classics, telling a story of love and light. The accompanying music and lights and water display makes for a magical evening event.

Disneyland Packing TIP: Remember to pack a blanket to save seats and sit on.

It’s so fun to meet and greet the characters in holiday outfits like Goofy in a Christmas Sweater and Santa Mickey! 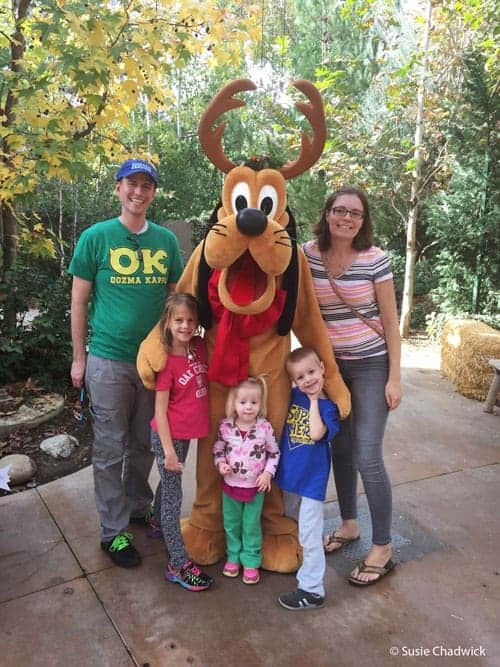 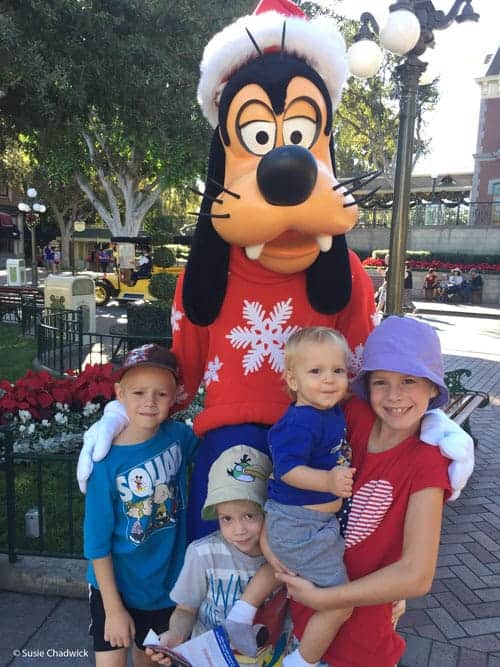 You can even meet Santa at Disneyland.

Disneyland Packing TIP: Order an autograph book before your trip to save money. Pack a fat marker for the characters to write with, and remove the cap for them. It’s hard to sign with paws.

Here are some tips on where to take photos of Winnie the Pooh!

Some of Disneyland’s classic rides get a holiday makeover each year. It’s a Small World Holiday will have you singing Jingle Bells instead of its usual tune from mid-November until mid-January. 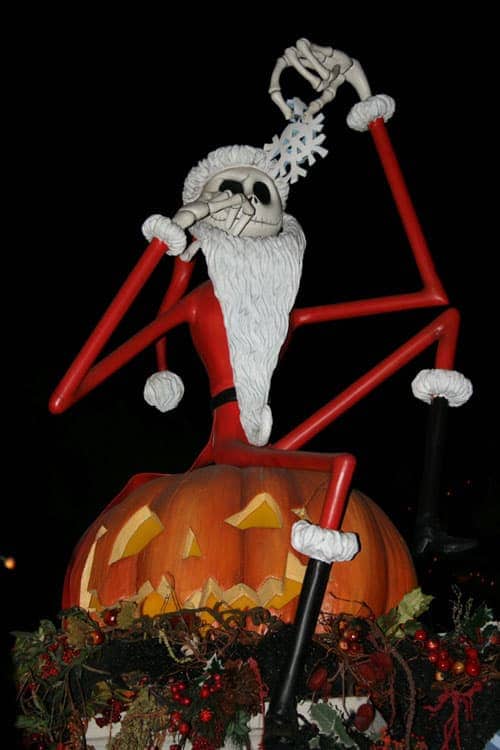 Disneyland Packing TIP: Buy some cheap Dum Dums lollipops or a bag of Goofy’s Candy Co Mickey pops before you go to save money. Keep them handy in your day bag to instantly quell tantrums, miraculously perk up tired legs, and keep kids holding out that last five minutes in line.

Special food offerings are available at Disneyland for all holidays, and Christmastime is no exception. From seasonal soups to themed krispy treats, the holiday foods at Disneyland will wow you.

MUST-EAT Holiday Treat: The Mickey-Shaped Beignets, available at the Mint Julep Bar in Disneyland, come in seasonal flavors during the holidays. Eggnog? Candy cane? You never know what holiday flavor will be available each year. 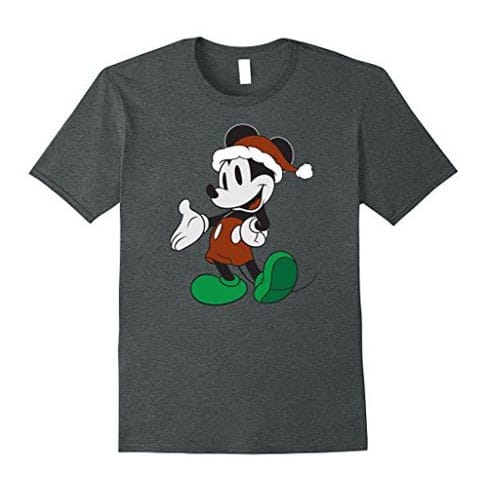 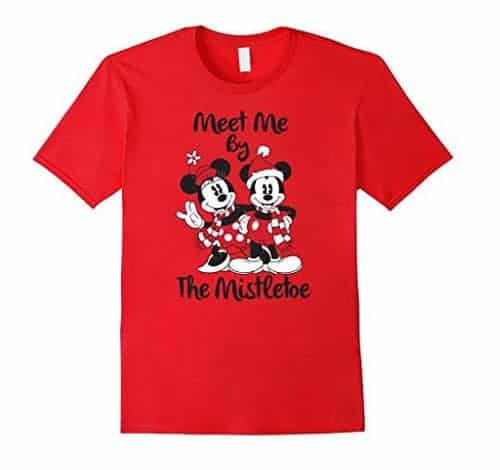 It’s no secret that the holidays are the most crowded time of year at Disneyland. From the week of Thanksgiving through New Year’s, attendance is up and lines are long. 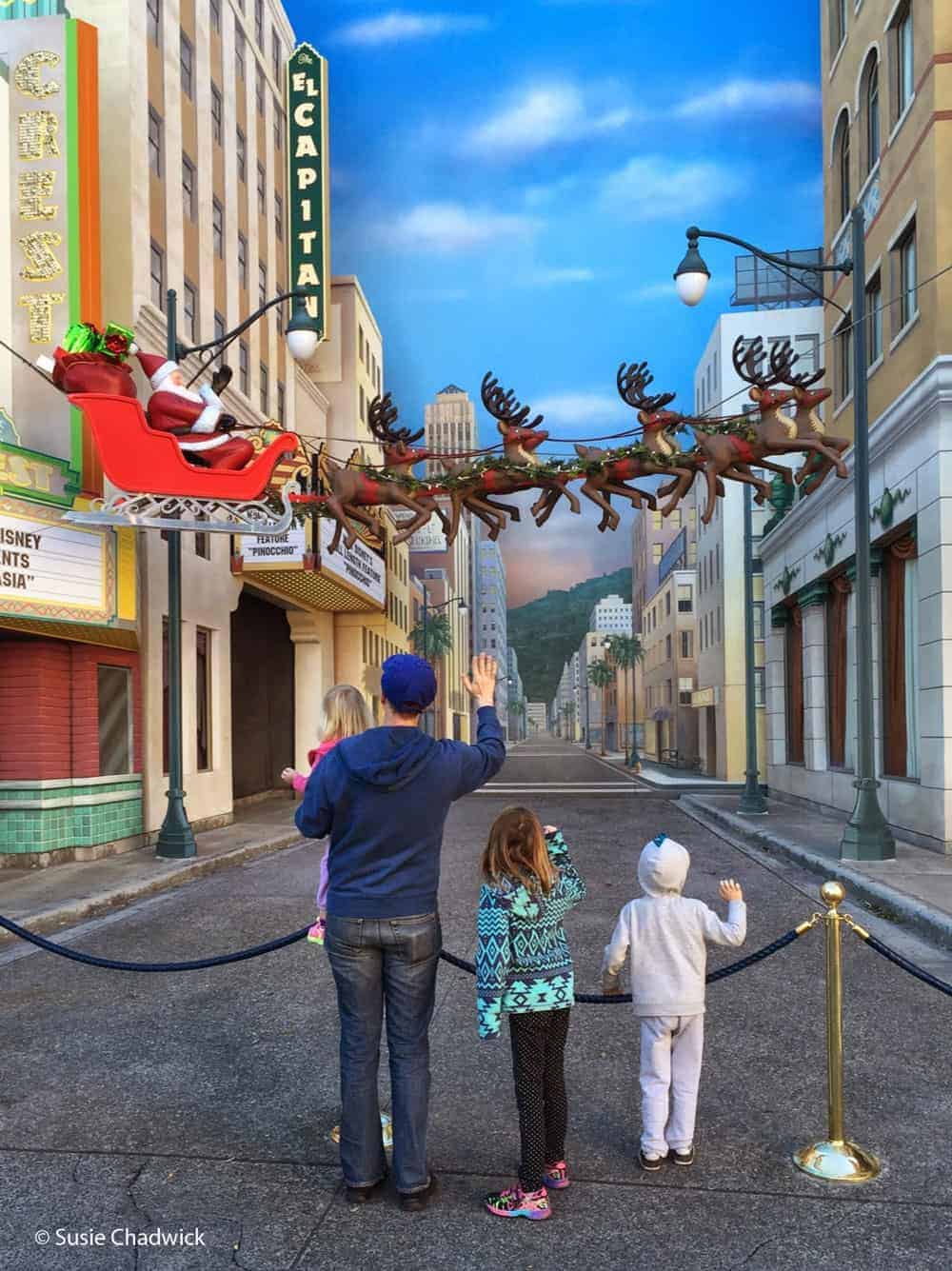 The best time to go during this period is early December, and weekdays in particular, so if you have the freedom to do so, schedule your trip during that time.

BEST TIP for avoiding crowds: Go early. Getting to the park before it opens is absolutely the best way to make the most of your time. Even on the most crowded days, Disneyland will have shorter lines during the first few hours of the day, and it is worth every minute of sleep lost. Be at the gate, with your tickets, 30-45 minutes before scheduled opening for the best impact.

What to Pack for Disneyland at Christmas

Here are a few specific tips for packing for a Disneyland trip during the holidays:

Jacket: First of all, even in Southern California, it gets chilly in the winter, and with the sun setting earlier, you’re definitely going to want a sweatshirt.

Rain: Wet weather is more likely at Disneyland in the winter months, especially in January, so be prepared for that with rain ponchos (use to protect yourself from getting wet on rides too) and umbrellas.

MUST-PACK for Christmas at Disneyland: Light-Up Accessories. Buy your own light-up Christmas bulb necklace instead of overpaying in the park. Since it’ll be dark earlier, be sure to bring glow sticks. 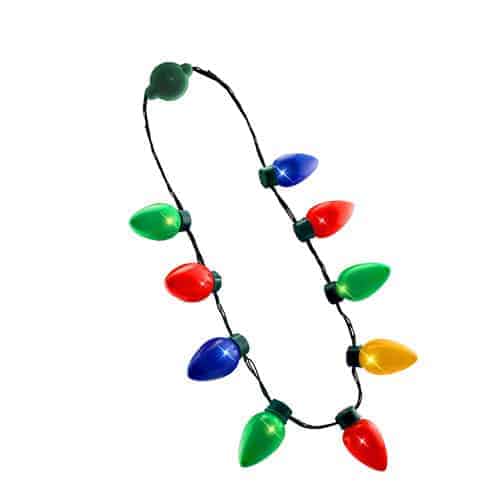 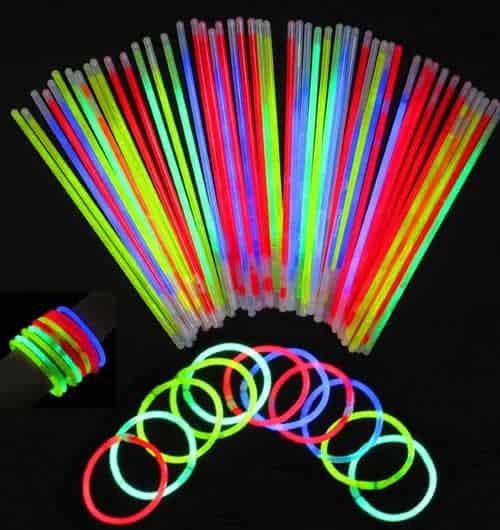 Also, a lot of people bring a string of Christmas lights to decorate their hotel room window if visiting Disneyland during Christmastime, which is fun.

READ my Disney Packing List of items you need to take into the park. The list covers all the basics so you can relax and have fun knowing you haven’t forgotten anything. 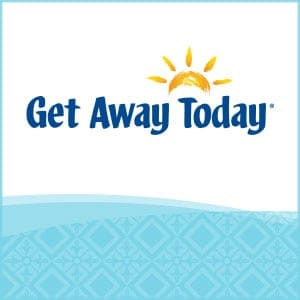 Get Away Today  – Nobody knows Disneyland better! Click the link to get an extra $10 off any 2-night or longer Southern California package.

US National Parks With Kids 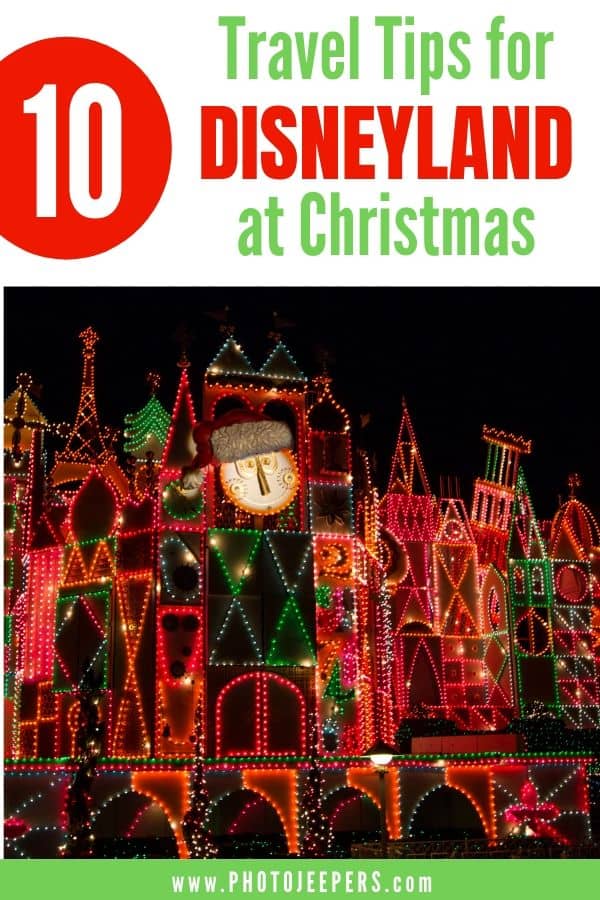 A weekly dose of tips for travel & photography! 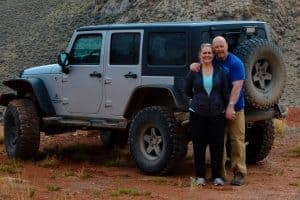 We are David and Jamie, travellers and photographers. We have combined our two passions into one place, this blog.

Here we share tips and tricks to improve your travel photography, travel resources so you can get the most from your upcoming adventure. 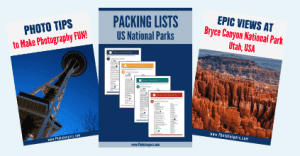 We are a participant in the Amazon Services LLC Associates Program, an affiliate advertising program designed to provide a means for us to earn fees by linking to Amazon.com and affiliated sites.
1239shares
This site uses cookies: Find out more.